Hey, if TuckamoreDew/Keith can finish another week of the Three Speed October challenge in snow and sub-freezing temps, you really don’t have an excuse! 😉 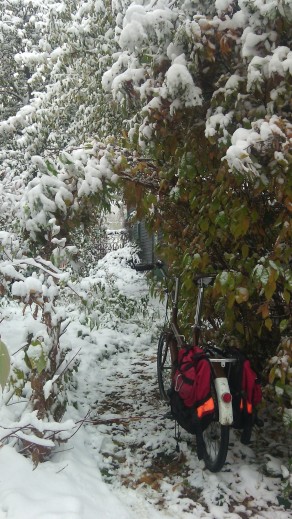 In this second week of the Three Speed October Challenge I completed the minimum criteria of three rides of at least three miles. A pair of autumn snowstorms and other logistical problems limited the number of three speed rides and frustratingly prevented me from bringing my third bike into play again. Next week. . .

The snowfall that began on Saturday continued through the night and into Sunday morning. I lingered about the house once again before heading outside. I wheeled my trusty grocery-getting Raleigh 20 Three-speed out of the garage and through the garden, ducking under branches sagging under the weight of the heavy, wet snow.

This ride turned out NOT to be qualifying ride as it was less than the required distance but I include it anyway in the interest of promoting the practicality of three-speeds.